General Description: Douglas Fir's heartwood is a light reddish-brown shade, and the contrast between earlywood and latewood provides a prominent growth ring figure which shows as an abrupt colour contrast on plain sawn timber and rotary cut veneers. The timber is straight grained but sometimes with wavy or spiral grain and with a uniform medium texture. Weight 530 kg/m³ (33 lb/ft³); specific gravity .53.

Timber from Pacific coastal districts is heavier, harder and stronger than from mountain areas, the latter being equivalent to timber from the UK. It has high stiffness and crushing strength, medium resistance to shock loads and high bending strength.

Douglas Fir dries rapidly and well without much checking or warping, but knots tend to split and loosen. There is small movement in service. Resin canals tend to bleed and show as narrow brown lines on longitudinal surfaces.

Distribution: USA and Canada. Also planted in the UK, New Zealand and Australia. 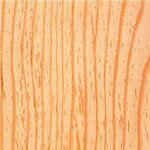 By continuing to use the site, you agree to the use of cookies. Read More